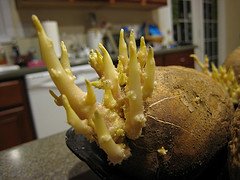 How many dozen screens has this potato passed through since it was last touched by human hands? And yet, in our mind’s eye it’s touchable, as fresh as it was the day it was first “screened.” You can almost smell it.

Yesterday I passed on an IM about a Stumble about a blog post about a Tweet, and it was good.

The very concept of passing on an IM about a Stumble about a Tweet, voluntarily, is dizzymaking. A shiny idea-nugget caught my attention, and, ping a ping ping, it was tripping through three screens for me, two of which I changed or created, and then it made a progression through a couple more screens on my chat friend’s end.

On the opposite end of the breadcrumb path, my idea-nugget had gone through several more screens to get to the originating blogger and become part of his blog post. Yon little tweety thing had been quite the traveler, before we even get close to the Tweets that inspired my happy chatty “Oh cool! I know someone who has to hear about this.”

Moving information from person to person is like a digital game of hot potato. In the case of tweets, let’s call it a game of toss the digitater, with many, many branches.